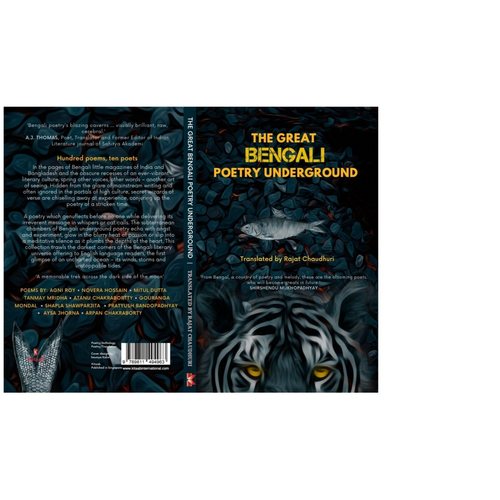 Hundred poems, ten poets, two countries, one language ... In the pages of Bengali little magazines of India and Bangladesh and the obscure recesses of an ever-vibrant literary culture, spring other voices, other words – another art of seeing. Hidden from the glare of mainstream writing and often ignored in the portals of high culture, secret wizards of verse are chiselling away at experience, conjuring up the poetry of a stricken time. A poetry which genuflects before no one while delivering its irreverent message in whispers or cat alls. The subterranean chambers of Bengali underground poetry echo with angst and experiment, glow in the blurry heat of passion or slip into a meditative silence as it plumbs the depths of the heart. This collection trawls the darkest corners of the Bengali literary universe offering to English language readers, the first glimpse of an uncharted ocean – its winds, storms and unstoppable tides. Poets: Agni Roy, Novera Hossain, Mitul Dutta, Tanmay Mridha, Atanu Chakrabortty, Gouranga Mondal, Shapla Shawparjita, Pratyush Bandopadhyay, Aysa Jhorna, Arpan Chakraborty Number of poems: 100 About the Translator Rajat Chaudhuri has published six books - Butterfly Effect, Calcutta Nights (translation) Hotel Calcutta, The Best Asian Speculative Fiction (ed), Calculus (in Bengali) and Amber Dusk. He is the Charles Wallace Creative Writing Fellow (2014) at the University of Chichester, United Kingdom, Hawthornden Castle Fellow (2015) and a Korean Arts Council Fellow (2013) at Toji Cultural Centre, South Korea. Chaudhuri is a past Fellow of the Sangam House International Writers Residency.